In Europe, IAHV provides Trauma-Relief, Resilience and Empowerment Workshops for refugees. We provide flexible programming, ranging from 1 to 10 hours, as well as follow up sessions.

Volunteers and organisations interested to provide the IAHV trauma-relief and stress management techniques to refugee populations, can attend a 2,5 day Volunteer Training organised on a regular basis across Europe.

In a next phase, we will offer advanced programs, as well as Peacebuilding Training for refugees who would like to return to rebuild their countries of origin. We will also start with Trainings on Social Cohesionwith both refugee and host community populations. 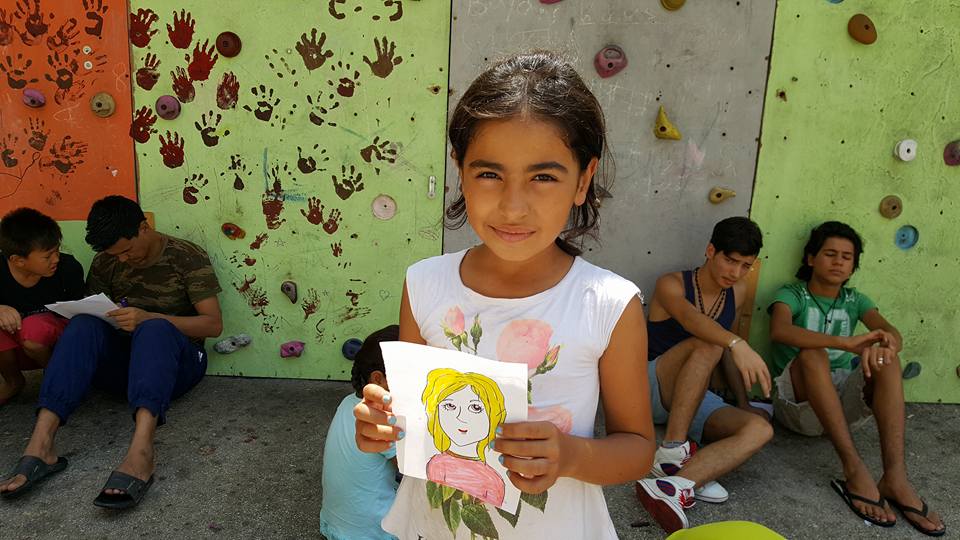 Belgium organised its first migrant HRE program in collaboration with a Dutch language school in Brussels. The participants came from various backgrounds, such as Mali, Morocco, Iraq, Armenia and Iran. Some have been in Belgium for a short time and some for a few years already. Despite their best efforts to integrate into the Belgian lifestyle and learn the local languages, they have been unsuccessful in securing stable work. With their emotionally heavy background coming from conflict areas and being away from their family and familiar surroundings, they were really looking forward to the HRE techniques and tools to increase their level of energy, enthusiasm and sense of hope.

After 3 sessions of 2 hours each, they released a lot of internal stresses and tensions and could finally experience some internal silence and deep relaxation. We have follow-up sessions every 2 weeks in order to ensure the integration of the techniques and tools learned. 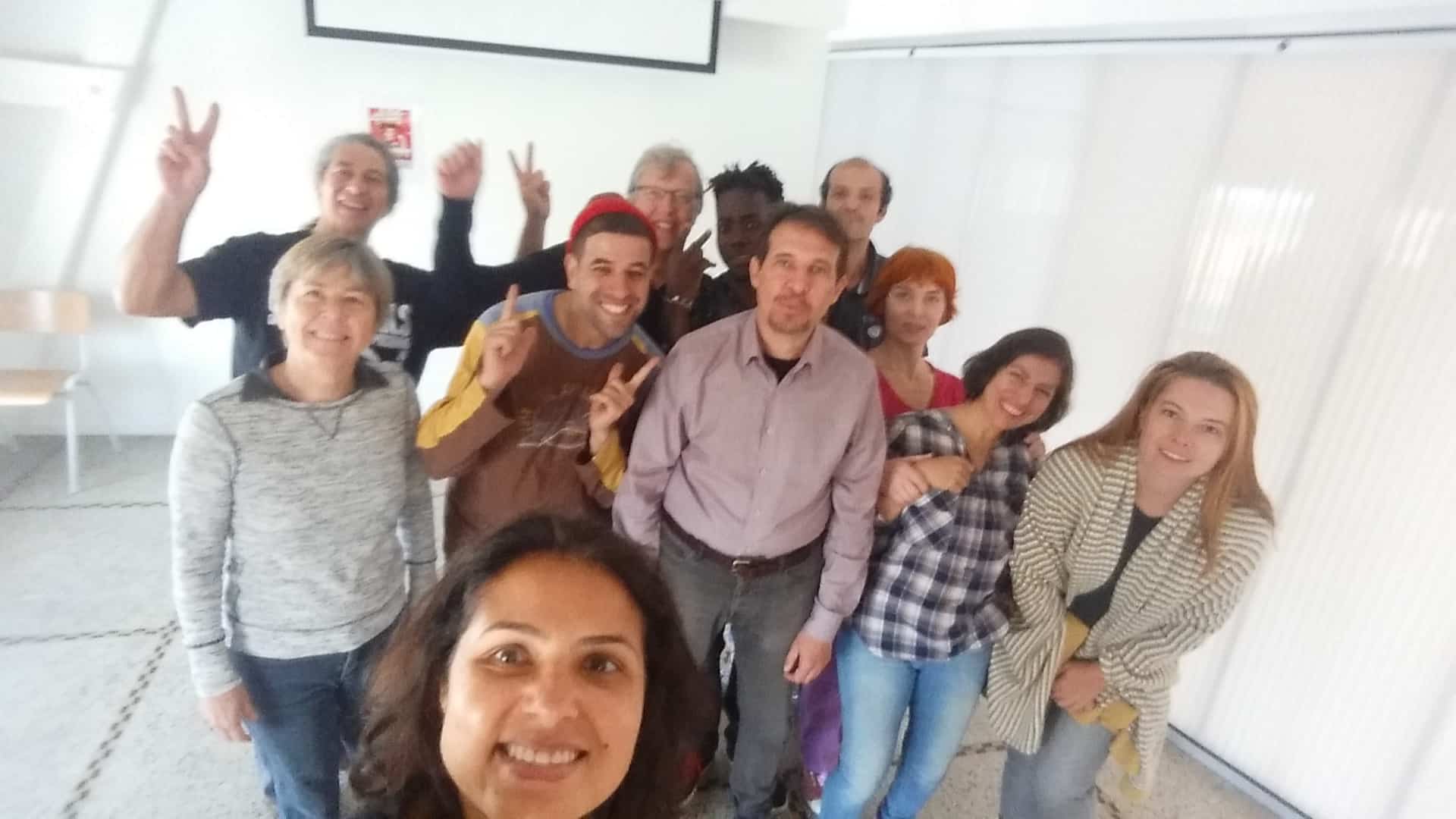 In 2016 we started a Peace and Reconciliation Program at Melissa Network, a centre for migrant women in Greece, promoting empowerment, communication and active citizenship for Syrian, Iraqi, Iranian, Afghani and Kurdish women. 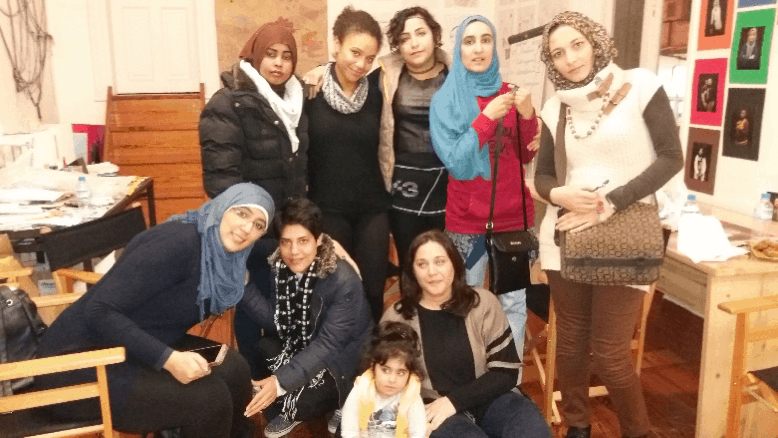 The weekly 1,5 hour program has seen a steady increase in the number of participants, who benefit from the simple techniques:

“You gave me some breathing exercises for my son and it has helped him so much. He relaxes and I see that his breathing is easier”

“Every time I leave the workshop I feel more calm and more relaxed. I told my mother to come and she feels the same”

For some years, we have also been working with children known as ‘endangered minors’ who have been separated from their families, refugee children and homeless young people living in a school in Athens. The majority of children come from Syria and Afghanistan but also Kurds and Iraqis. Most of these children are in transit and move to countries across Europe mainly Germany, Sweden, Switzerland and Holland. We run sessions for the young people twice a week and 5 day courses on the islands in the Summer. 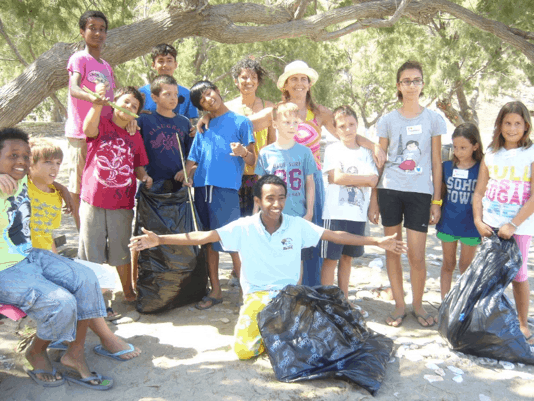 Two boys from our original group in Athens, who are now adults, help us with the sessions in the school, while the other boys have, over the years, been reunited with their families. 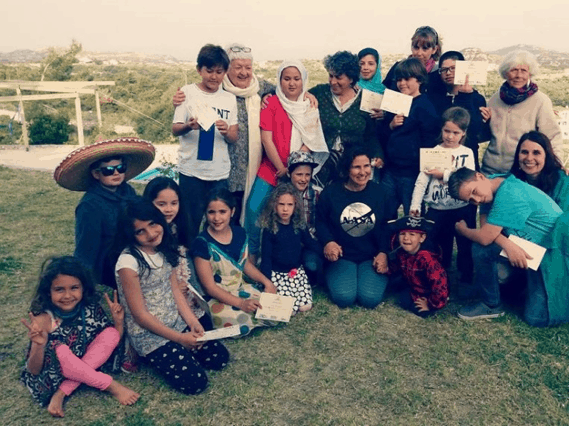 Jined and Mousse, now help at the school.  Ramin did the Art of Living program in Hamburg last year and Aron and Abil are now living in Zurich where they met Sri Sri Ravi Shankar at the Ethics in Sport Conference. 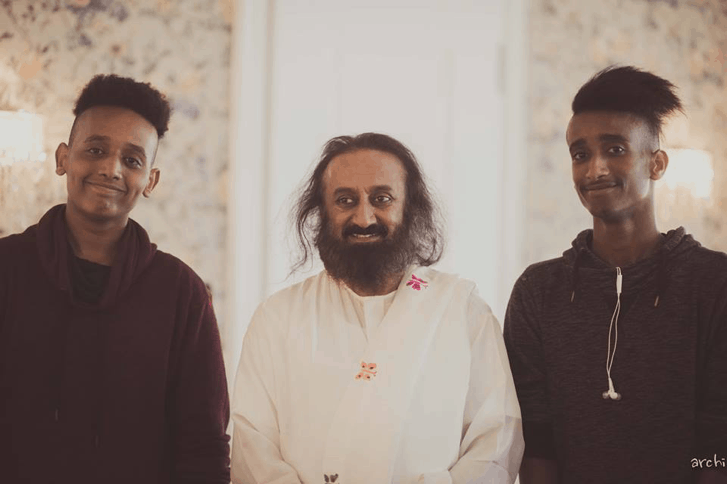 We also organise trips to the dentist when needed as well as the very popular swimming trips in the summer. We work mainly in the playground of the school as the rooms are needed for families to live in. Last Christmas we organised a Christmas party for all the children which was a big success!

After Syrian refugees came flooding into the Netherlands, many Dutch citizens felt compelled to support them and offer a helping hand. The same was true for trainers and other volunteers of IAHV and the Art of Living Foundation. This led to the first Healing, Resilience and Empowerment training for volunteers, organised in September 2016. Subsequently, the participants formed 4 regional teams, in different parts of the country. 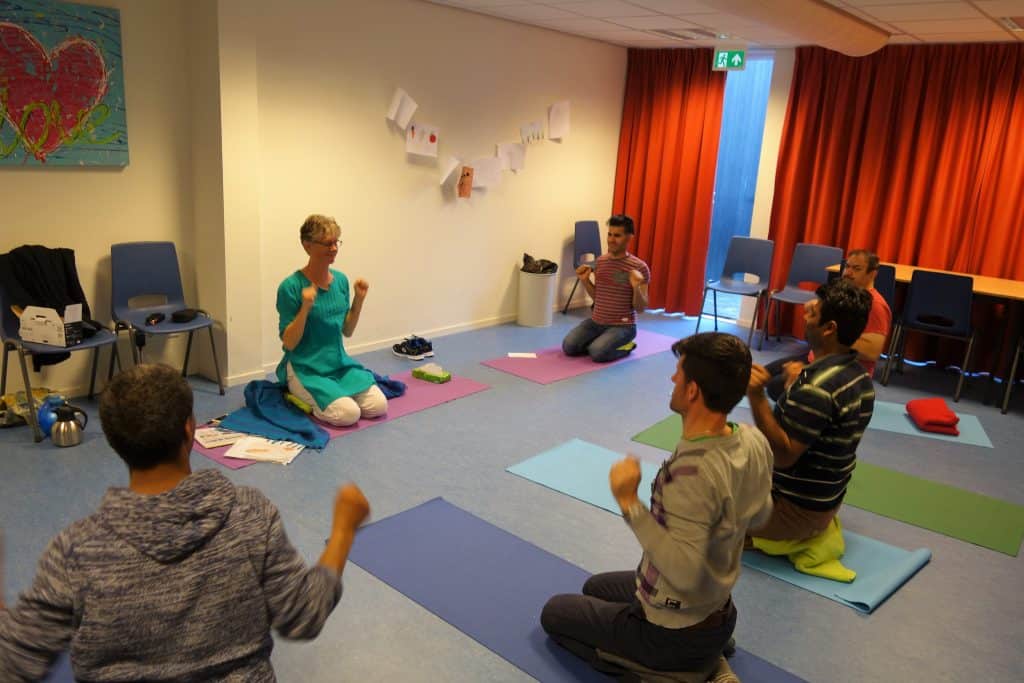 The teams organize stress release courses for refugees in close cooperation with (governmental) organizations responsible for the reception and support of refugees in the Netherlands. The courses provide the refugees with tools to release stress and relax mentally and physically. After the 3 day course, participants are invited to join the weekly follow ups.

Participants are very enthusiastic about the results of the course and bring their family and friends to join the sessions. The majority originates from Syria, Iran, Afghanistan and Eritrea. They report improved sleep, more peace of mind and improved ability to concentrate during Dutch language classes. According to one of them, even his friend noticed his improved mood after the sessions. 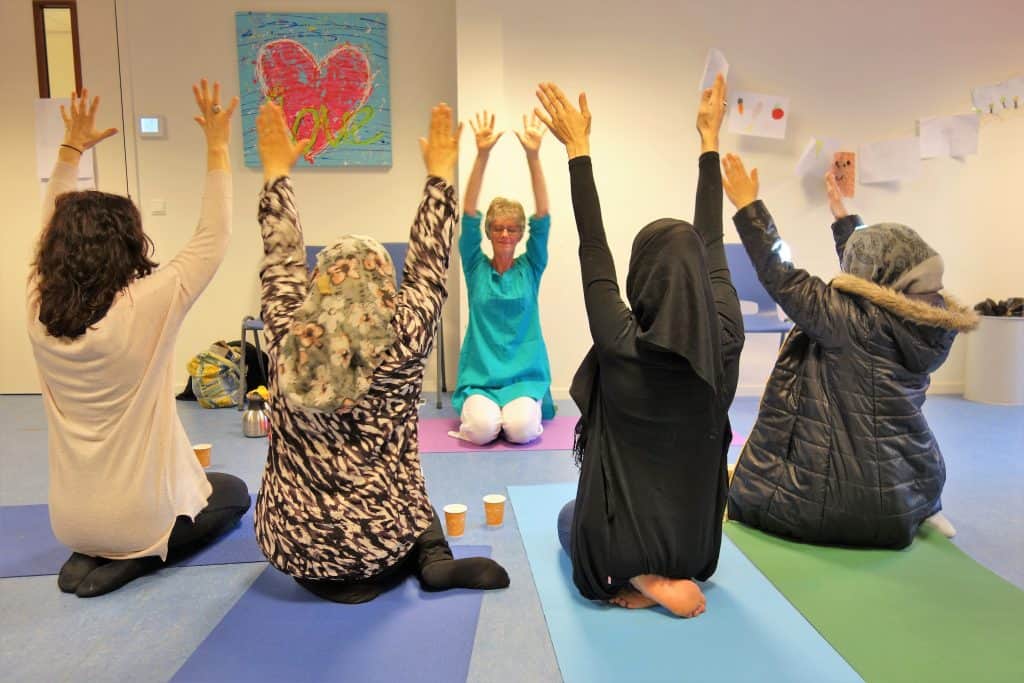 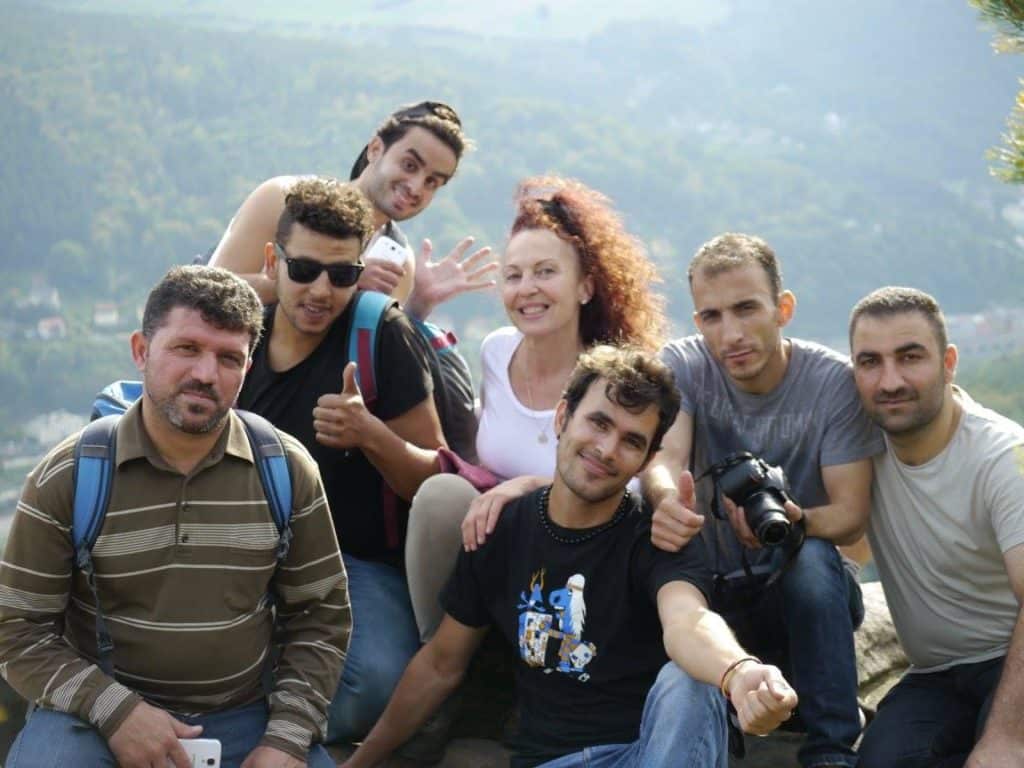 People from conflict affected regions – such as Afghanistan, Iraq, Somalia, Nigeria, Eritrea and Syria - have reached Germany searching for refuge. Those who participated in the HRE courses in Germany highlight the joyful and deeply relaxing effect they experience in a safe and calm space. For them it is an opportunity to come back to their inner self. Often after a long time they can sleep well again and focus and concentrate better.

"The course is very good for my health, for my body and for the mind. Much better than medication. After the course I feel relaxed and calm. Finally laughing again has done me really well. It was funny and beautiful. When I regularly practice the exercises I feel a positive change in myself.” - Shaukak, 25yrs, Afghanistan 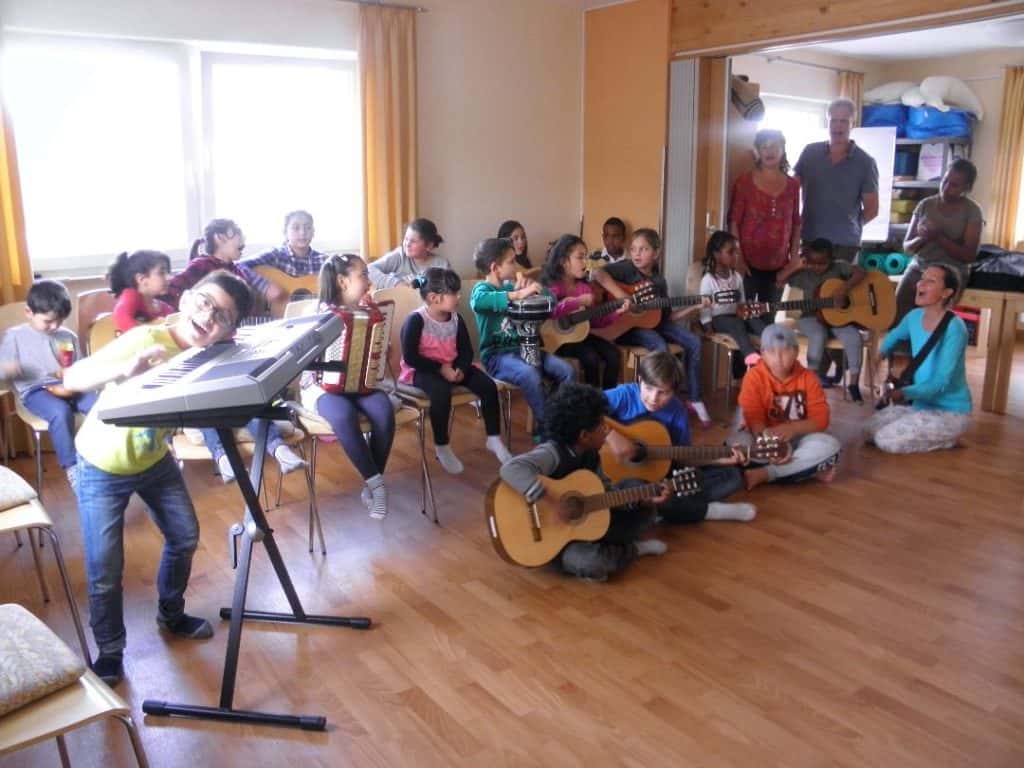 Altogether 12 courses have been implemented so far in München, Bochum-Witten, Dresden, Marburg and Berlin with more than 100 participants. In some cases we run courses for unaccompanied women with children or for children only. Wherever possible, weekly follow up meetings are organised to strengthen the bonds which have been developed as well as to encourage implementing the course content. Through several training of trainers we hope to extend our support to other locations in need.

We are cooperating with municipal institutions, refugee centres, training, cultural and education institutions and charities. Based on our positive experiences we are aiming at further extending cooperation especially with municipal and regional governmental agencies.
This website uses cookies to improve your experience. We'll assume you're ok with this, but you can opt-out if you wish.Accept Reject Read More
Privacy & Cookies Policy
Necessary Always Enabled

We welcome like-minded organisations to partner with us in an integrated approach so that our complementary efforts can work in a synergetic way to maximize our impact for a long lasting and self-sustaining peace.

We aim to lay a strong psycho-social foundation on which other organisations can successfully implement their peacebuilding and development programs.

If you or your organization want to learn more about our approach and projects or are interested to become a partner, feel free to fill out the form below: